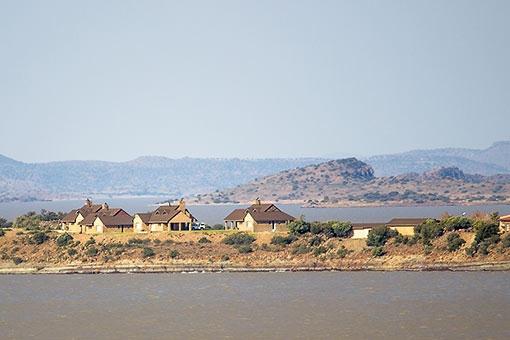 Gariepdam nature reserve in the Free State side stretches 65km’s from the Gariepdam dam wall in the west to the Bethulie bridge in the east. 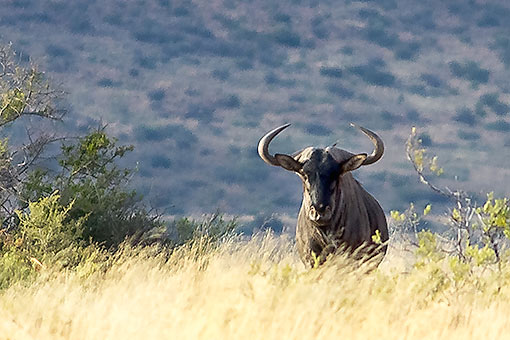 Oviston nature reserve in the Eastern Cape stretches 85km’s from the Bethulie bridge in the east to the Gariepdam dam wall in the west.

There are nature reserves running right around the Gariepdam water line.

This, the Free State’s largest nature reserve, is popular among game watchers, anglers and boating enthusiasts. The reserve boasts the largest number of Springbok in the country and other animals such as zebra, black wildebeest and ostrich.

The Free State’s largest nature reserve is a combination of the 36 487ha Gariep Dam (which holds back a vast 6 000 million cubic litres of water) on the Orange River and an 11 237ha game sanctuary on its northern shore.

From the dam some 200 000ha of land is irrigated, by means of a tunnel of 83,8 km, delivering water to the upper valleys of the Fish River, and then from another 13,2 km tunnel to the Sundays River. The dam covers some 374 square kilometers.

With the supply of some 455 million litres of water to the dry Karoo region around it, the hydro electric scheme generates 600 000 kilowatts of power, as well. The dam was officially opened in 1972 and has long been popular with anglers and boating enthusiasts.

The Lakegariep game reserve accommodates the largest population of springbok in any reserve in the country and also features Cape mountain zebra, klipspringer, black wildebeest, red hartebeest and ostrich.

Situated between Bloemfontein and Colesberg in the Free State, it is an ideal place to stop over on your way between Cape Town and Johannesburg.

Adjoining the Reserve and close to the gariep Dam Wall, is the privately owned Aventura Resort, with an extensive range of sporting and entertainment facilities that are available to the whole family, like swimming, tennis, golf, trampolines, bowls, mini golf and water sports.

There are also a number of Guest Houses and B&B’s at Gariep Dam Village.

Water sports and attractions include sailing, power boating, canoeing, skiing, angling and sporting. A tour through the dam wall could also be done, down to the bedrock – an amazing feat of engineering that beholds your eyes. All in the Lake !Gariep area to be viewed.

In the southern Free State between the Caledon and the Orange Rivers, Tussen die Riviere Nature Reserve is situated. Between the two rivers the reserve is more than 22 000 hectares. This nature reserve is home to game, including eland, gemsbok, springbok, black and white rhino and black wildebeest.

It caters for wildlife tourism and hunting in the winter months. Various hunting packages for surplus game are annually offered to the public. During this period the reserve is restricted to hunters. Outside this period it is open to sightseers.

Sightseers can explore nearly 120km of dirt road route in the reserve. Bird watcher will not be disappointed when they spot waders and larger water birds including the blue crane seeking their prey in the grasslands and white-bellied stork. Another route follows the Orange River through evocative mountainous terrain.

The climate is transitional between the Karoo and the Highveld. Summers are hot with thunderstorms and rain. Winters are cold and ideal for hunting in the Free State.

On the plains you will find blesbok, black wildebeest, springbok, red hartebeest and zebra grazing. Along the treed banks of the rivers you might spot a black rhino or buffalo. The nocturnal animals in the reserve include the aardwolf, aardvark and the bat-eared fox.

This reserve is in the Lake !Gariep area and must be visited!

Take note: It is hard work to keep all the data on this site accurate and therefore it is your responsibility to confirm that the info is accurate.
Use all information on this site at own risk. If you find information that needs to be updated, please contact us immediately.
Photos and site © 2019 by tourism photographer BerendPhotography.com / web & design by: eapproach.co.za